"At best, John From Cincinnati’s Jean-Luc Godard-like working methods lend the show an exhilarating spontaneity and sense of possibility. It’s quite literally a show where anything can happen. At worst, it feels clumsily put-together on the spot by actors groping to comprehend a master plan even a super-genius like [David] Milch doesn’t seem to understand."
—From Nathan Rabin's overview of the series 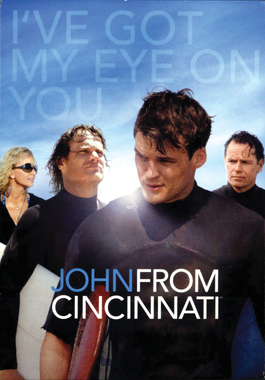 John from Cincinnati is a drama, set against the surfing community of Imperial Beach, California, that aired on HBO from June 10 to August 12, 2007. It is the result of a collaborative effort between writer/producer David Milch and author Kem Nunn, whose novels have been termed surf noir.

The program deals with John Monad, a strange young man of mysterious origin, and the effect he has on a dysfunctional family of professional surfers and their community.

It was cancelled after one season.