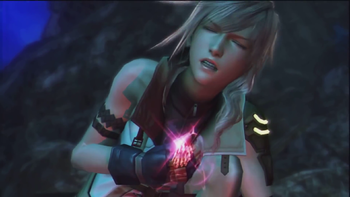 "Owwww...my soul! No, seriously, this is actually making my soul hurt. I don't know how it's possible, but apparently, it is."
— The Necro Critic, Christmas Shoes review
Advertisement:

When a character feels horrid pain in an... abstract way. It can be their soul, heart, spirit, hair, consciousness, or the nervous system itself, but it never leaves a physical mark and involves no gore despite it being unimaginably painful.

This trope is most frequently found in "kid-friendly" fantasy and science fiction works in an effort to heighten drama without the use of blood. Most likely, the hero is experiencing a psychological, supernatural, or magical attack that gives him/her ambiguous chest pains or a mind-splitting headache. You can bet that the hero will be doubled over in pain, unable to move.

Scenes with this trope can be pretty frightening anyway if used well, like with trippy spirit monsters chanting and hovering over the hero, or surreal montages of the hero's fears playing before his/her eyes. (See one of the possible causes, Mind Rape.)

Soul Pains usually can't kill a character by themselves. Sometimes Having Soul Pains could bring about the character's death, although it's never obvious exactly when the pain would get bad enough to actually kill him/her. Darker and Edgier works will use this trope to drive characters to suicide, just to make it all stop.

Sometimes used to bring the battle between good and evil to a personal level. In those cases, the true battle between cosmic forces is inside the characters, not out on a physical battlefield.

A character who has a Soul Jar will likely experience this if said jar is damaged or (especially) destroyed since in this case their soul is physically being damaged.

Possible symptoms include abstract clenching or burning sensations, splitting headache, or the feeling something on the inside will a splode. Causes include Mind Rape, an Agony Beam, a Soul-Cutting Blade, the presence of evil, Demonic Possession, Involuntary Shapeshifting, or using abilities that qualify as being Blessed with Suck. It may or may not be possible to heal a soul pain/injury/wound, depending on the work and case. In some settings, it may be overcome through Determinator-style Heroic Willpower. If you suffer from Soul Pains, ask your doctor if treatment through the Power of Friendship is right for you.

Achey Scars is when Soul Pains are connected to a physical scar.

Not to be confused with deaths that are only bloodless due to censorship.

Alternative Title(s): I Am Having Soul Pains