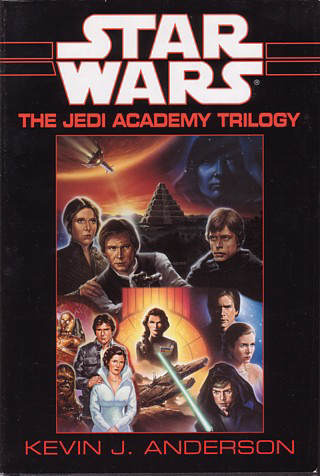 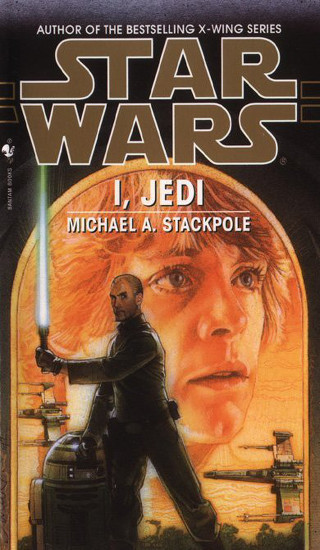 is a set of books in the Star Wars Legends. The three books, Jedi Search, Dark Apprentice and Champions of the Force, were written by Kevin J. Anderson starting in 1994; in 1998, Michael Stackpole of X-Wing Series fame wrote I, Jedi, but we'll get to that in a bit. It should also be noted that in 1995 Anderson wrote Darksaber, a semi-sequel to the Jedi Academy Trilogy, which we talk about over here.
Advertisement:

The Jedi Academy Trilogy deals with Luke Skywalker and a couple of quasi-Jedi, with training even more incomplete than his, setting up a Jedi Academy on Yavin IV, seeking to train a selection of Force-Sensitives including, most promisingly, a prideful leader from a dying world, who rants about a "dark man", attacks Luke, is not reprimanded, and then is found burned to death in his room.

Meanwhile, Han and Chewbacca are sent to the prison world Kessel, where they pick up a lucky, prideful young man named Kyp Durron, escape with him, and find their way to the Maw, a secret Imperial installation where superweapons were designed and made. There they steal the Sun Crusher, a tiny indestructible ship that can blow up stars, and break out, in the meantime cluing in the Maw's carefully isolated defensive armadas to the fact that the Rebellion has won. The leader of the Maw's forces is Natasi Daala, characterized by being a rare woman in the Imperial military, by being prideful, by getting as far as she did by being Tarkin's lover, and by being wildly incompetent.

While Daala wages war, Kyp is brought to Yavin to pitch the Sun Crusher into a gas giant, and it turns out he is Force-Sensitive. Extremely so, in fact. The dark man begins training him. Turns out the dark man is the long-dead spirit of Exar Kun, Dark Lord of the Sith, who has been trapped on Yavin for four thousand years. After snapping at a student who is filking about one of Exar Kun's Jedi opponents and generally being a jerk, Kyp waits until Mara Jade swings by, steals her ship, yanks the Sun Crusher out of its gas giant, and flies away in it, supposedly to fight Daala, destroying entire systems in the process. At some point Luke is put into a sort of coma, able to astral-project but not able to speak to anyone.

Kyp, looking for his brother, swings by the Imperial training academy, a world with twenty-five million inhabitants, and makes its star go supernova when they tell him his brother is dead. Turns out his brother was still alive, was being the operative word, as the supernova weapon is irreversible and Kyp's brother got caught in the blast seconds before Kyp could save him. Oops.

Han Solo tracks Kyp down and Kyp threatens him while Exar Kun moves openly, influencing one of the students to try to kill Luke. The other students stop him, then apparently destroy Exar Kun. With Kun's influence removed, Kyp suddenly realizes how far off the deep end he's gone. Kyp surrenders to Han, then they go to the Maw and pitch the Sun Crusher into a black hole where it really can't be retrieved, drawing the Death Star prototype into the same black hole in the process. Then Kyp is shuttled back to the Jedi Academy to continue his training.

Corran Horn, Rogue Nine, finds himself with a psychic wound when his wife vanishes while up against the Invids, an Imperial sect that includes Force-Sensitives and is supported by a gang of pirates. Luke coaxes him into being part of the new Jedi Academy, and Corran accepts after disguising himself, since as Corran he's mildly famous and doesn't want extra attention. At the Academy, he is dismayed by a number of things, including the very lax discipline, Luke's refusal to tell anyone if what they are doing is wrong, his commanding officer falling for the scientist who designed the Death Star, and his own inability to move things with his mind, though as it turns out he can make people think things had moved (and he's so good at it that he could probably persuade the thing itself it's moved). He is further dismayed by Kyp, and Luke's focus on his new most promising student. The destruction of Carida is made into something horrifying and traumatic, Exar Kun's actual demise is drawn out and given a bit of thought, and Corran leaves in disgust when Kyp is welcomed back.

Then Corran goes to his homeworld, Corellia, talks things over with his grandfather, and infiltrates some of the pirates who associate with the Invids, in the meantime picking up a Camaasi who is able to straighten out his morals. Eventually he chases all of the pirates off a planet with a campaign of intimidation, faces down the Sith-influenced Jedi sect called the Jensaari alongside Luke, and saves Mirax.