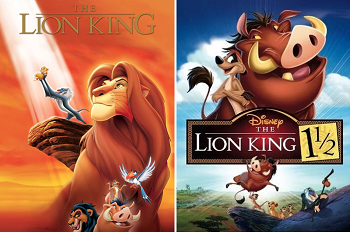 "Normally people have trouble with sequels after their first idea is so, and I'll say it, so transcendentally brilliant. But not me! I have ideas for basically infinite sequels. Basically infinite out-of-genre cover sequels that is!"
— T-Rex, Dinosaur Comics, 13/03/2008

So the film was a massive success, and the studio wants you to make a sequel! Trouble is, you killed off all your main characters for real, blew up the Earth, destroyed the Time Machine and stopped the Big Bad from ever being born. So where do you go from here? Well, there was that one really cool side character - perhaps we could retell the story from his perspective!

The P.O.V. Sequel, sometimes called a "Parallel", is a sequel, Interquel, or Spin-Off which, instead of putting your initial main characters in a new situation, simply retells a previous one from a different perspective (point-of-view) typically from another character or new protagonist. Done well, it can help you flesh out your side characters that the audience may have felt deserved more attention, and add new perspectives to the story up to and including making your Card-Carrying Villain into a sympathetic guy. Done badly, it reeks of laziness.

Very similar to Simultaneous Arcs, which tell several different stories happening in the same storyline of a single work. Although, if it must be very rare to have a P.O.V Sequel telling no events simultaneous to the previous installment, strictly speaking, it's not impossible. The converse is more frequent however (simultaneous stories featuring unrelated characters). In some cases, it can be from the POV of the initial main character or characters somehow revisiting those events.

Compare the Perspective Flip and the Elsewhere Fic, the non-canon equivalents (for canon or original characters, respectively); A Day in the Limelight, where the P.O.V. changes but tells an original story; Changing of the Guard, where the main character shifts to tell an original story; Been There, Shaped History, when the sequel protagonist does something that retroactively affects the original's plotline; and "Rashomon"-Style, where the character's opinions can color what the audience sees. Gaiden Game can be a video game specific version. Another Side, Another Story is a video game specific subtrope where the P.O.V. Sequel is another game mode unlocked after you complete it the first time. Can also be an exploration of But for Me, It Was Tuesday.

Not to be confused with Synchronous Episodes, where two episodes are set at the same time, but their plots don't overlap.

The ninth episode of Season three "Whatever It Takes" sees the events of the opening to Jurassic World Fallen Kingdom from the perspective of Darius, Brooklyn and Yaz as they witness the mercenary getting chased by the Tyrannosaurus before being eaten by the Mosasaurus.

The ninth episode of Season three "Whatever It Takes" sees the events of the opening to Jurassic World Fallen Kingdom from the perspective of Darius, Brooklyn and Yaz as they witness the mercenary getting chased by the Tyrannosaurus before being eaten by the Mosasaurus.