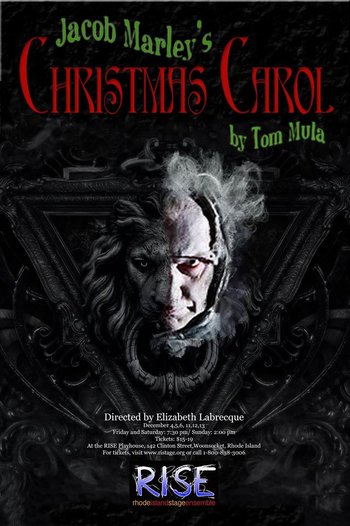 Jacob Marley's Christmas Carol is a play, radio adaptation, and novel written by Tom Mula. Initially written in 1994, the novel version was republished in 2010 with updates from the play version. It's traditionally performed in a minimalist style, with little in the way of costuming or sets, and can be done with four people who alternate roles or one person.

The story focuses on Jacob Marley of A Christmas Carol fame, who finds himself weighed down and trapped by iron chains for all the evil he'd done in life. Marley will be sentenced to eternal torment in Hell unless he can do the impossible—redeem Ebenezer Scrooge, the one man worse than he was, in 24 hours. Guided by a mischievous imp called a Bogle, Jacob Marley sets out to redeem his former partner, and may just find redemption himself.