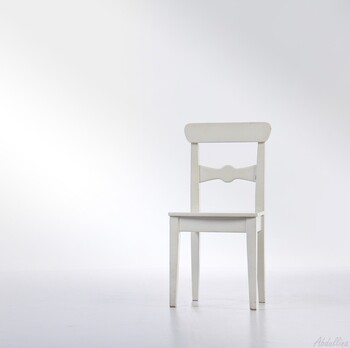 There isn't even anyone sitting in it.
"If a writer of prose knows enough of what he is writing about he may omit things that he knows and the reader, if the writer is writing truly enough, will have a feeling of those things as strongly as though the writer had stated them. The dignity of movement of an ice-berg is due to only one-eighth of it being above water."
— Ernest Hemingway summing up minimalist fiction's raison d'etre.
Advertisement:

Many works of fiction try to be as epic as possible. A new work will try to top the ones that came before it, and the sequels try to top their predecessors.

Minimalism goes for the exact opposite.

Minimalism is when a piece of fiction lowers the scale of the events depicted within it, not simply due to time and budget restraints, but rather for creative reasons.

The reasons for a minimalistic approach to a work can vary greatly. For example, the author of the work may be trying to do a "back to basics" approach to a sequel, as the previous entry in the franchise had gotten too "over the top". Perhaps if the movie spends less time on grand action scenes involving hundreds of extras, the film can spend more time with dialogue, improving character development. Perhaps if the TV show only has one villain instead of many, more time can be spent developing that character in order to make him seem more intimidating. Maybe if the book only uses short, non-descriptive sentences instead of paragraphs of exposition, the book will read at a more dramatic pace. It's possible that if the film has one Special Effects scene instead of a hundred, more time and money will go into that one scene, improving the quality of the effect. Perhaps a horror movie believes that if they hide the monster off screen instead of showing it in its full glory, it will leave the details of the creature to the audience's imagination, making it scarier. There is no real singular reason as to why, it's just a creative choice.

Minimalism is essentially the exact opposite of the Bigger Is Better trope. Here, smaller is better.

The Other Wiki has an article about this