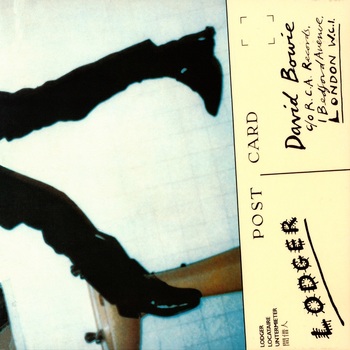 "I am a DJ, I am what I play."
"David Bowie. Moving on once again. Explore a new quality of life."
—Tagline from the album's advertising campaign.
Advertisement:

Lodger is the thirteenth studio album by David Bowie, released in 1979. The third and final album of what critics and fans call the "Berlin Trilogy" of his Krautrock/Post-Punk albums (though most of the album was recorded in Switzerland or New York City). It also marks the end of his working relationship with Brian Eno. The two reunited later for his 1995 album 1. Outside.

Lodger is perhaps the most accessible entry in the Berlin Trilogy, to the point where an uninitiated listener wouldn't be able to tell that it had any relation with Low and "Heroes"; there are no instrumentals on side two and the songs are lighter and more pop-oriented. Additionally, while its two predecessors are rooted more strongly in Krautrock, art rock, and avant-garde music, Lodger is more strongly based in a mix of post-punk and World Music (though not without conspicuous art rock leanings), predating Peter Gabriel and Talking Heads' similar blend of genres on Melt and Remain in Light by roughly a year.

The album peaked at No. 4 on the UK Albums chart, while in the US it outperformed its predecessor, peaking at No. 20 on the Billboard 200. The album would later be certified gold in the UK and the Netherlands.

Lodger was supported by four singles: "Boys Keep Swinging", "DJ", "Yassassin", and "Look Back in Anger". The latter single was exclusive to the United States, being released there in place of "Boys Keep Swinging", which executives feared would be received poorly in America due to its sexually androgynous undertones.

Life is a pop of the cherry, when you're a trope: