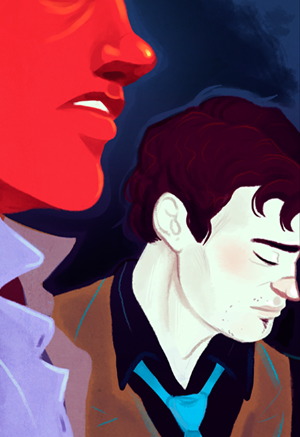 is an online graphic novel by Grace Mulcahy, taking place in and around a human colony on the planet Novaus. This planet is inhabited by an alien race called the rubre who make up nearly half the cast.

Off the coast resides an island owned by an allegedly peaceful society in protest of organized religion. However, since the death of its original founder, the movement has fallen into the hands of Sevastian Quinlan, the schizophrenic son of the founder, and Sithar Noens, a rubran dictator who owns the island’s property. Through Noens’ manipulation of Sevastian’s mental instability, the movement begins taking captives and placing demands on the New American government. The story begins with “Guy” Adaman, Noens’ servant and ward to several hostages, as he learns to rebel with the help of a youthful hostage, Artie Lachance. Soon, the two come to realize that Noens has a far more wicked conspiracy in mind, one which will affect a larger scale of people.

The main plot is encompassed by a frame story which takes place 80 years after these events. It is implied that the events described are solely fabricated by author Laurie Clarke, but as time progresses, this proves much less likely…