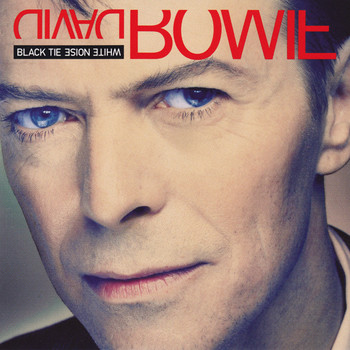 "Don't listen to the ground."
Advertisement:

Black Tie White Noise is the eighteenth studio album by David Bowie, released in 1993. His first solo album since Never Let Me Down in 1987, it once again represented the start of a new phase in his career.

Prior to the release of this album, he met, and later married, the model Iman Abdulmajid. As a result, numerous songs on the album revolve around the pair's newlywed bliss at the time, interspersing these love songs with ones featuring more socially conscious and introspective material influenced by both his growing age (being 46 at the time of the album's release) and the Los Angeles Riots.

The album marked a number of reunions between Bowie and collaborators who he hadn't worked with in years. Nile Rodgers, who helped produced Let's Dance, co-produces this album as well; meanwhile, Bowie's 1970-1973 guitarist Mick Ronson (who would later pass away from liver cancer that same year) and his 1973-1975 pianist Mike Garson (who'd reappear on most of Bowie's later albums) make guest appearances on one song each. Despite featuring the same producer as Let's Dance and a similarly slick, pop-friendly sound (not to mention coming out just in time for the tenth anniversary of Let's Dance), Bowie denied claims that the album was a third attempt at doing a follow-up to his 1983 megahit, stating that if they had intended to make a Let's Dance II, they would've done so back when it was still relevant.

That said, the album acts as a Spiritual Successor to the album that first catapulted Bowie into international superstardom (itself a self-professed successor to Young Americans), combining Bowie's trademark art rock with an en vogue genre of Black dance music: Contemporary R&B in this case. Combined with the artistic renaissance that followed, it acts as an apt casting off of the legacy of Bowie's '80s period, briefly bringing back the suit-clad, pop-peddling Sharp-Dressed Man for one final album before definitively closing the door on it. At the same time, its Electronic Music influences, described by Bowie as his own take on House Music, would point the way for his forthcoming experiments with Alternative Dance and industrial rock, straddling the line between the recent past and the immediate future.

Black Tie White Noise became Bowie's first album to reach No. 1 on the UK Albums chart since Tonight in 1984 and his last to do so until The Next Day 20 years later, though in the US it would peak at a more modest No. 39 on the Billboard 200, signifying Bowie's return to mere cult popularity in America after having previously maintained a good mainstream standing since Young Americans in 1975. The album would additionally be certified gold in the UK, Canada, and Japan, missing certification in the United States (his first album to do so since Scary Monsters (And Super Creeps)).

The singles produced by this album comprised of the UK Top 10 hit "Jump They Say", the Title Track, and "Miracle Goodnight".

"Putting on the black tie, cranking out the white tropes":