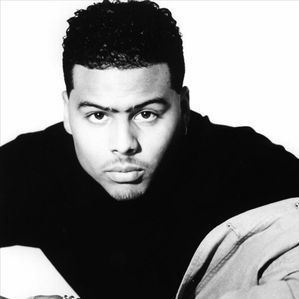 Al B., during his heyday.
Advertisement:

Prior to his music career, Sure! was known locally as the star football quarterback at Mount Vernon High School. His talents earned him an athletic scholarship to the University of Iowa, but he rejected it to pursue music full time. In 1987, he was personally selected by legendary music producer Quincy Jones as the inaugural winner of Sony's Innovator Talent Search. Warner Bros. Vice President of black music Benny Medina offered Sure! a recording contract to record his debut. Sure!, despite initially starting as a rapper, spent six months teaching himself how to sing and compose melodies with his cousin and producer, Kyle West.

His first appearance on an album was Heavy D's Livin' Large, providing singing vocals on "Dedicated" and "Don't You Know", thanks to being childhood friends with album producer DJ Eddie F. This led to him getting introduced to Uptown Records founder and CEO Andre Harrell, who brought Sure! into Uptown as an artist.

Sure!'s debut album, In Effect Mode, was released by Uptown, with Warner Bros. Records providing distribution. The album became a huge success, topping the R&B/Hip Hop charts and hitting number twenty on the Billboard Hot 200, selling two million copies. The album received multiple award nominations and spawned multiple R&B hits, including "Nite N Day", Sure!'s only single to reach the top 40 of Billboard's pop charts. During this time, Sure! also appeared on the R&B smash "The Secret Garden (Sweet Seduction Suite)" from Quincy Jones' Back On The Block as a part of a quartet that also featured Barry White, El DeBarge and James Ingram.

But as fast as he rose to fame, it quickly started to fade out by the early nineties. His 1990 sophomore follow up Private Times... And The Whole 9! only went Gold, and it's lead single "Missunderstanding", just barely missed the Top 40, while 1992's Sexy Versus bombed. After Sexy Versus, he mostly stayed behind the scenes, writing tracks for multi-platinum R&B artists such as Faith Evans, Jodeci, Usher, Case, Tevin Campbell and many others, while providing the occasional song to various movie and TV soundtracks. In 2009, Sure! returned to music and released his fourth album Honey, I'm Home on Hidden Beach Recordings.

Sure! currently hosts "The Secret Garden" on iHeart Radio.