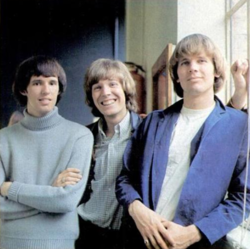 L-R: Gary Leeds, Scott Engel, John Maus
"The sun ain't gonna shine anymore
The moon ain't gonna rise in the sky
The tears are always clouding your eyes
When you're without love"
Advertisement:

The Walker Brothers were an American Teen Idol Pop trio active in The '60s and The '70s. Of course, none of them were brothers or were named Walker; they were instead John Maus, Noel Scott Engel, and Gary Leeds, but John was already performing as John Walker prior to the group's formation, so Scott and Gary followed suit as Scott Walker and Gary Walker.

Originally formed as "The Walker Brothers Trio" with John, Scott, and drummer Al "Tiny" Schneider, the group started out in a Rock & Roll and Blues style and became a popular attraction at Gazzari's Club in Hollywood. Tiny was soon replaced with Gary, fresh from his time in the Standells and having toured the UK. Gary, and apparently Gazzari-regular Brian Jones, convinced the group that their sound would go down well in London. Cue them signing to Philips Records through Johnny Franz and making hits.

Their sound grew into densely orchestrated, Phil Spector-inspired Baroque Pop, alternating between covers of contemporary Pop standards and Blue-Eyed Soul, though Scott occasionally wrote originals. In a reversal of The British Invasion happening at the time, the group found great success in the UK with a string of hits including "The Sun Ain't Gonna Shine Anymore" and "Make It Easy on Yourself", easily rivaling The Beatles' popularity there at the time, though they had minor success in North America as well. Scott gradually took a leading role in the song choices and arrangements, foreshadowing his lauded solo career, but the band's popularity eventually waned. Due to internal tensions and Creative Differences, the band broke up in 1968.

While all three began solo careers, Scott's was by far the most successful, with his first three solo albums all reaching the UK Top 3 and being critically acclaimed to this day. However his increasing experimentation, and perhaps releasing it under his given name, caused his fourth, Scott 4, to flop. It has since been Vindicated by History as a masterpiece, but the initial failure left him in a creative slump for the next few years. In 1974, to help support each other, The Walker Brothers reformed and had another UK Top 10 hit with a cover of Tom Rush's "No Regrets". This would be their last hit, though they kept recording until 1978, when their label announced it was going under and gave them a blank check to do whatever they wanted.

Enter Nite Flights, the last Walker Brothers album that is best remembered as the first Scott Walker album for the rest of his career. With all three members given a chunk of the album, Scott went full-on Darker and Edgier art rock, foreshadowing the nightmarish Avant-garde Music of his later solo albums. The band called it quits there.

John went on to build custom guitars, open a recording studio, and resume touring in 2004 until his death on May 7, 2011. He and Gary released a joint autobiography, The Walker Brothers: No Regrets—Our Story, in 2009. Scott, along with being largely reclusive, continued to record very sporadic but acclaimed solo albums and film soundtracks until his death on March 22, 2019. More info about Scott's solo career is on his own trope page.

My Trope is Coming In: