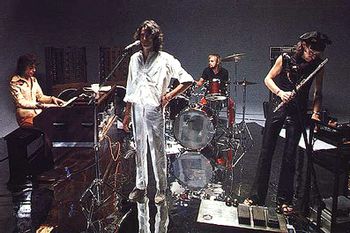 Not your average band.
"Here, at the glass, all the usual problems, all the habitual farce
You ask in uncertain voice, what you should do- as if there were a choice
But to carry on, miming the song
And hope that it all turns out right"
—"The Undercover Man", from Godbluff
Advertisement:

Van der Graaf Generator (sic) is an English Progressive Rock band (although they would deny that) originating in the late 1960s. They operated in four distinct periods and are currently in their fifth, all featuring Peter Hammill, who is the Face of the Band and primary songwriter. Their name is often shortened to VdGG.

Van der Graaf Generator are an unusual Progressive Rock band in that they focus on dark, dreary themes (such as the invasion by the Spanish Inquisition or isolation atop a lighthouse with Cosmic Horror Story undertones) and feature very little guitar/electric guitar in their music. Instead, the sound is dominated by ominous organ work, frenetic screeching saxophones, frenzied jazz drumming and dynamic singing ranging from crooning whispers to a death metal-esque scream.

For some reason this was the recipe for massive success in Italy.

One album released (The Aerosol Grey Machine), it was meant to be a Peter Hammill solo record but contractual obligations meant that it had to be released under the VdGG name. They were a typical psychedelic band during this era.

Three albums; The Least We Can Do Is Wave to Each Other, H to He Who Am the Only One and Pawn Hearts. In 1970 they began to forge their original sound and garner significant attention. Pawn Hearts is one of two albums most frequently cited as the band's best. Problematic European touring, especially in Italy, caused considerable stress (due to things like neo-fascist organisations turning up at their concerts) and eventually the band decided to temporarily split in order to prevent lasting damage.

Three more albums; Godbluff (second contender for best album) Still Life and World Record. This period featured a re-emergence of the previous sound. This era was marked by the début of a slightly more accessible and aggressive sound, and the departure of Jackson & Banton at the era's closing.

Two albums; The Quiet Zone/The Pleasure Dome & the live album Vital.This period was a marked departure to VdGG's established style and a sound that wouldn't really be revisited by the band. The saxophones & organ were replaced by violins, prominent guitar and other electronic gimmickry. After the band split this time, they became dormant for over two decades.

2003-present: Second Reunion and Beyond

The classic lineup reunited on stage duing a Peter Hammill solo concert in 2003 for a one-off performance, in 2004 they began recording in studio and then released a new album of all-new material in 2005, Present. Soon after Jackson quit, and VdGG continued on without him, releasing the live album Real Time in 2007 and the studio albums Trisector in 2008 , A Grounding In Numbers in 2011, Alt in 2012 and Do Not Disturb in 2016. They continue to tour.

I am the one who pressed through space
Or stayed where I was
Or didn't exist in the first place.....