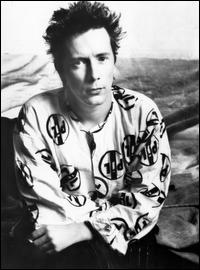 Public Image Ltd. (PiL for short) are a Post-Punk band (and possibly an Ur-Example of the genre/aesthetic) formed by John Lydon in 1978 after his departure from the Sex Pistols, a move that freed him to pursue his interest in experimental music, dub, prog rock, and various other types of music that were non grata in the world of late 70's Punk Rock that the Pistols had helped cultivate. The group has gone through a bewildering range of changes of personnel and musical styles, and occasional hiatuses, and at this point effectively consists of Lydon and whoever else is in the band at the moment.

The band split in 1992, and Lydon attempted a solo career (that only resulted in a single album, Psycho's Path, which bombed) and then reunited The Sex Pistols. In 2009, Lydon reunited PiL with a lineup consisting of Lydon, former members Lu Edmonds and Bruce Smith, and multi-instrumentalist Scott Firth. A new album, This Is PiL, was issued in May 2012; a follow-up, What the World Needs Now..., was released in September 2015.