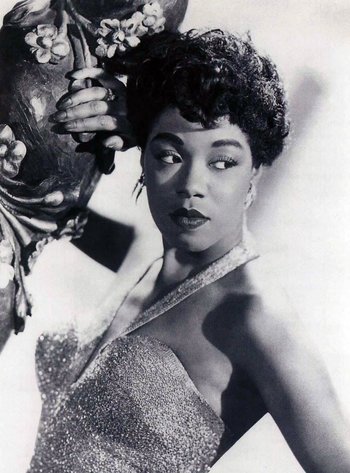 The Divine One
She is so good now that when I listen to her I want to cut my wrists with a dull razor.
— Frank Sinatra
Advertisement:

Sarah Lois Vaughan (March 27, 1924 – April 3, 1990) was an American Jazz singer, famous for her sweet and magnificent voice, which earned her the nickname "The Divine One".

She became famous in the 1930s and 1940s when touring with Earl Hines' big band and baritone Billy Eckstine. Initially she was hired as a pianist, but eventually, she became the lead singer of the band. When Eckstine left in 1943 Vaughan joined his band a year later. In 1945 she began a highly successful and critically acclaimed solo career and would tour the world for the next half century. She is best remembered for her signature songs "Tenderly" (1948), "Broken Hearted Melody" (1959) and the Stephen Sondheim cover "Send In The Clowns" (1973).

In 1964 she performed in front of Lyndon Johnson at the White House. She also played a private concert for Gerald Ford and French president Giscard d'Estaing. In 1989 she was bestowed with the NEA Jazz Masters Award, the highest honor a jazz artist can receive.