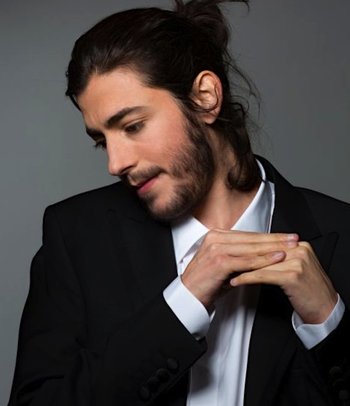 Sobral is perhaps best known for representing his native Portugal in the 2017 Eurovision Song Contest with the song "Amar Pelos Dois" note English: "To love for the both of us", which gave the country their first-ever victory in the competition since they began competing in 1964 — the longest-ever gap between a country's inaugural and winning entries at Eurovision.

Their victory also came after a string of failed Eurovision entries in The New '10s — having not qualified for a final since 2010 — which partly motivated them to skip the contest altogether in 2013 and 2016.

The song, written and composed by Sobral's sister Luísa, is the first winning song of the contest to be sung entirely in a language other than English since Serbia's 2007 entry, "Molitva", by Marija Šerifović. note The previous year's winner, "1944" by Ukraine's Jamala, contained lyrics in Crimean as well as English. Upon receiving the Eurovision trophy, Luisa joined her brother on the Eurovision stage to perform a reprise of the song together.

Prior to winning Eurovision, Sobral competed on the third season of Pop Idol Ídolos, where he placed seventh. In 2016, he released his debut album Excuse Me. In addition to his career as a solo artist, he is also a member of the band Alexander Search, who released their self-titled debut in 2017.

He is also outspoken - whilst he is a strong philanthropist, his attitude has been known to rub other acts the wrong way, as he has openly spoken out against manufactured music, refused to hear visiting entries in the 2018 contest Portugal hosted, and at one point before the main event called its eventual winner, "Toy" by Netta, horrible as a song, so it was no surprise he would give her the trophy.