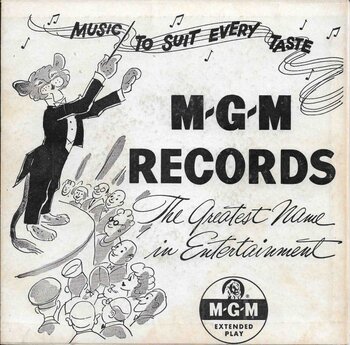 Leo the Lion strikes up the band on this EP sleeve from 1950.
"Music to suit every taste"
—Slogan of MGM Records in The '50s
Advertisement:

In the era immediately following World War II, society started to change in ways that didn't favor the film industry, thanks to the Fall of the Studio System and audiences turning to the new medium of television. One of the companies that suffered the most from this was Metro-Goldwyn-Mayer, but at least it had a successful division to fall back on; in 1946, it became the first movie studio to launch a record label — an example all its competitors would follow in the years ahead. By the mid-50s, MGM Records had become one of "Big Six" labels that dominated the American music industry and were successful enough to own their own pressing plants.note The others were Capitol, Columbia, US Decca, Mercury and RCA Victor.

Not surprisingly, MGM Records started by releasing soundtracks of the parent company's movies, but it also diversified into popular music. The label became a force in Country Music, where its roster included Marvin Rainwater, Conway Twitty, and one of the genre's icons, Hank Williams. (Hank Williams Jr. also began his recording career there.) MGM dabbled in Jazz with Billy Eckstine, then added to its portfolio by acquiring a label devoted to the genre, Verve Records. Teen Idol Connie Francis enjoyed numerous hits, while Mark Dinning made his mark with the Teenage Death Song "Teen Angel". When The British Invasion began, MGM got American rights to The Animals (who eventually signed with the label worldwide) and Herman's Hermits, as well as some of The Beatles' early recordings with Tony Sheridan. Roy Orbison came to the label hoping to use its Hollywood connections to become a movie star, a la Elvis Presley. (It didn't work out, as his acting career fizzled after only one film.)

Speaking of Hollywood connections, MGM put out several records by actors throughout its history. Most of them were ordinary Pop music, but some of them... weren't. Want to hear Alec Guinness reading from the works of Jonathan Swift? Sebastian Cabot reciting Bob Dylan lyrics as if they're Shakespearian sonnets? Voice actor Paul Frees doing impressions of actors from The Golden Age of Hollywood performing contemporary pop hits (for example, "Hey Jude" as interpreted by Peter Lorre)? MGM released it all.

While MGM was a prosperous label, it began to stumble as the hippie counterculture became prevalent. In 1968, the company joined forces with Record Producer Alan Lorber to create a marketing campaign called "The Bosstown Sound", which consisted of signing several Psychedelic Rock groups from Boston (most notably Beacon Street Union, Orpheus and Ultimate Spinach) and selling them as East Coast rivals to San Francisco bands like The Grateful Dead and Jefferson Airplane. While the main three groups all placed their albums on the charts, Hype Backlash soon set in, and none of them went on to lasting fame — with one exception: the drummer of another Boston band caught up in the promotion, Chamaleon Church, was a young Chevy Chase.

In 1970, label president Mike Curb announced that he was dropping any MGM act that promoted drugs. These included the remaining Bosstown bands, as well as other performers whose contracts were up anyway. (Contrary to popular belief

, the list did not include The Velvet Underground, who had transferred from Verve; they'd already left MGM at that point.) Animals leader Eric Burdon (who had taken the group in a psychedelic direction and released pro-drug songs such as the LSD tribute "A Girl Named Sandoz") was quick to point out that MGM wasn't dropping him, because he was their best-selling artist. However, Curb was praised by the Richard Nixon administration, which helped him in his later career as a Republican politician.

Under Curb's leadership, MGM went in a more traditional pop direction. Its most popular act of The '70s was The Osmonds, a singing family with a squeaky-clean image (similar to MGM's earlier signing The Cowsills) whose members starred in two different TV series (a Band Toon made by Rankin/Bass Productions and the Variety Show Donny And Marie). Sammy Davis Jr. had his biggest hit in years with "The Candy Man".

In 1972, the struggling MGM studio sold its record company to the Dutch music conglomerate PolyGram, which retained the rights to use the name and trademarks. Mike Curb left to start his own label in 1974. The most notable signings of the post-Curb era included veteran Soul singer Lou Rawls, Disco diva Gloria Gaynor ("Never Can Say Goodbye"), country star C.W. McCall ("Convoy") and Elf, a Hard Rock band featuring a pre-stardom Ronnie James Dio. However, the hits started to dwindle, and in 1976 MGM Records and its acts were absorbed into another PolyGram label, Polydor. In 1982 the imprint was briefly revived for the soundtracks of two MGM films, Poltergeist and Victor/Victoria, and that was it for new releases. In 1997, the film studio took the MGM Records name back because PolyGram hadn't used it in years, but they never did anything with it. Today, the MGM catalog is split between Warner Bros.' WaterTower Music (which owns the film soundtracks) and various labels of Universal Music Group (which own everything else).