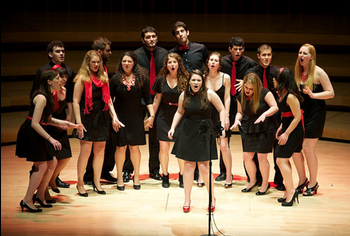 "We do it without any instruments, it's all from our mouths!"
— Chloe, Pitch Perfect

The musical style of A cappella is music performed without musical instruments. The name comes from Italian, meaning "in the manner of the chapel" because instruments weren't originally used in churches. note The style contrasted with cantata, which is singing accompanied by instruments, and there was also a difference between polyphony and concertato style. The distinction was blurred later and today A cappella simply means unaccompanied vocal music.

A cappella may include singing, vocal sound effects, and sound effects made with the body like clapping or slapping. There are several traditional and modern movements such as religious music, choirs, barbershop, doo-wop, doit, beatboxing and so on.

Barbershop is a uniquely American style, typified by consonant four-part chords for every melody sung in homophony. They usually perform easily understandable lyrics and easy melodies. You may also recognize them by their striped outfits with straw hats.

Doit is vocal ornamentation used in jazz music. Doo-wop is a style of vocal-based rhythm and blues music developed in black communities in the 1940s, achieving mainstream popularity in the 1950s and early 1960s.

Beatboxing is a close concept and a form of vocal percussion. Musicians produce drum beats, rhythm, and sounds with only their mouth, lips, tongue or voice. It's connected with Hip-Hop, but not exclusively.

Tons and tons of Youtubers do A cappella covers of various songs (often with the original recording playing in the background) and sometimes create and sing new ones.

Popsicley and Chocolatey put on a rapping spectacle with no instruments used.

Popsicley and Chocolatey put on a rapping spectacle with no instruments used.