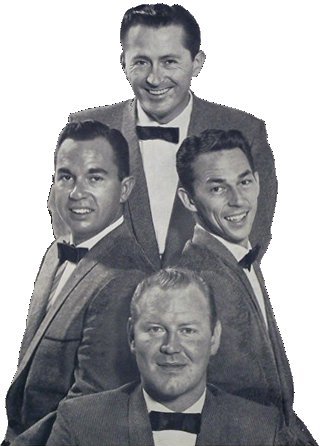 If you wonder where Brian Wilson got his idea for The Beach Boys' amazing harmonies, here's your answer: The Four Freshmen.

This influential vocal bandnote (the group also plays their own instruments, hence why they're not a "vocal group") first started out as a barbershop quartet known as Hal's Harmonizers in 1947, which included brothers Don and Ross Barbour along with Hal Kratzsch and Marvin Pruitt. Pruitt was soon replaced by Bob Flanigan, cousin of the Barbours, and in 1948 they adopted the "Four Freshmen" name. Their influences included Glenn Miller's Modernaires and Mel Tormé's Mel-Tones; from there, they would develop their own improvised vocal harmony style, singing five-notes chords with four voices in open harmony.

Their big break came in 1950, when band leader Stan Kenton heard the group perform at the Esquire Lounge in Dayton, Ohio. Highly impressed by the "quartet that sounded like his 43-piece ensemble", he arranged for an audition with his label, Capitol, which signed them later in the year. A couple of singles would follow, along with an appearance in the film Rich, Young and Pretty.

Both singles flopped, so when the Freshmen proposed "It's a Blue World" as their next single in late 1951, Capitol rejected it and dropped the group. A furious Kenton acquired demo copies of the song so the band could promote it themselves. Their efforts paid off: the song became their first charted hit and Capitol re-signed them in July 1952. Several successful singles and albums would follow.

Alongside label mate Frank Sinatra, they were one of the pioneers of the Concept Album. Several of their albums were centered around a musical concept, such as the top-10 Four Freshmen and Five Trombones, or a lyrical theme, like Voices in Latin or Voices in Love.

Hal Kratzsch got tired of touring by 1953 and was replaced by Ken Errair, who was himself replaced by Ken Albers when he left the group to get married in April 1956. The Freshmen became one of the first groups to perform at college auditoriums and field houses. That new younger audience helped them score the biggest hit of their career, "Graduation Day", in 1957.

Don Barbour left in 1960, to be replaced by Bill Comstock—the Flanigan-Comstock-Barbour-Albers lineup ended up being the longest-lived, lasting 13 years until Comstock himself left in 1973. By then, the group had pretty much faded into irrelevance; their contract with Capitol ended in 1964, and one single on Decca in 1966, followed by four albums on Liberty in 1968–69, would be their last major-label releases. While they managed to remain competitive in the mid-1960s thanks to Brian Wilson giving them free publicity via his public admiration of the quartet, they were effectively relegated to "easy listening" stations by the 1970s.

With Ross Barbour leaving in 1977 and Ken Albers following in 1982, Bob Flanigan remained as the sole original member until his retirement in 1993. He continued to manage the Four Freshmen until his death in 2011. The lineup since about the 1980s has been very fluctuating: as of 2016, the group has had 24 distinct lineups among 25 different members.

The Four Freshmen were an important influence for future vocal groups, including The Beach Boys, The Manhattan Transfer, The Lettermen, The Four Preps, and many others. By way of the Beach Boys, they were also an indirect influence to many, many more artists.

Members are listed by order of first appearance with the group. The information for several members regarding the instruments they played is incomplete; feel free to fill it in if you have that information handy.
Discography

It's a blue world without tropes: