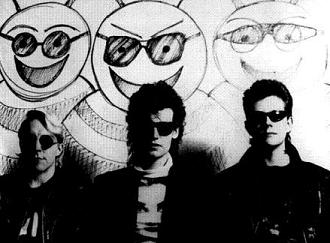 Tones on Tail was a Post-Punk side project by Bauhaus guitarist Daniel Ash, composed of him with friend Glenn Campling and later Bauhaus drummer Kevin Haskins. The group took Bauhaus' gloom and doom and warped it into what they called "doom-and-dance-pop", fusing several different styles and sounds together into a unique take on Post-Punk and New Wave Music. They released one LP, Pop, and several singles and EPs before splitting in 1984. A 1998 compilation, the aptly named Everything!, gathered up... everything.

Ash and Haskins attempted to reform Bauhaus with bassist David J, but singer Peter Murphy declined, so the three instead formed Love and Rockets to commercial and critical success. Love and Rockets broke up in 2009, and after a period of Daniel focusing on solo work, he and Kevin formed Poptone in 2017 with Haskins' daughter Diva Dompe on bass. While they played songs written and sung by Ash from all three previous bands, their live shows leaned heavily on Tones on Tail material.