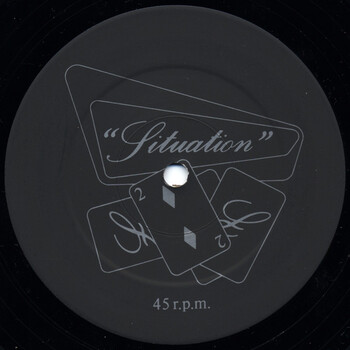 Situation Two was a sublabel of Beggars Banquet Records that enjoyed considerable success in its own right.

The imprint was started in 1981 by Peter Kent, who co-founded 4AD Records (another Beggars subsidiary) but left after a short time to create an outlet for his own signings. The best-known of these acts was The Associates, who launched Situation Two with a series of singles that were eventually compiled on the Fourth Drawer Down album. Other early S2 acts included Biting Tongues, Gene Loves Jezebel, Thee Hypnotics, Lydia Lunch, Singers & Players, and even singles by Divine and Ministry, both licensed from the Chicago label Wax Trax. Since Beggars Banquet was distributed by WEA Records, while Situation Two and 4AD were handled by independent companies, the two labels allowed Beggars to have a presence on the indie charts.

As The '80s continued, Situation Two evolved into a "farm team" for Beggars Banquet, as any band that became popular enough would be transferred to the parent label; this happened with acts such as The Bolshoi, The Cult, The Icicle Works, and Fields Of The Nephilim. S2 also released some Beggars-related projects, such as reissues of pre-Beggars material by The Fall and The Go-Betweens, as well as Bauhaus spinoffs such as David J, Tones On Tail and The Sinister Ducks (whose pseudonymous members were actually David J, Alex Green of The Jazz Butcher, and none other than Alan Moore).

By the beginning of The '90s, Situation Two had developed a strong roster of its own, including Buffalo Tom, Carnival Art, The Charlatans UK, The Dylans, The Hair & Skin Trading Co, and Loop, among others. However, this didn't last long; since Beggars Banquet had ended its WEA deal and switched to independent distribution, it decided it no longer needed a sublabel to represent it on the indie charts. Therefore, Situation Two was deactivated in 1992, and its acts were moved to Beggars Banquet.