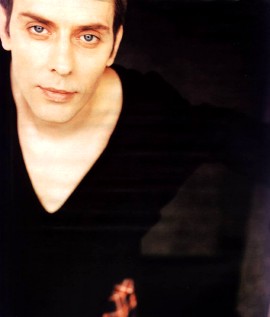 Peter John Joseph Murphy (born 11 July 1957) is a British Alternative Rock musician currently based in Turkey. He came to prominence in The '80s as the Large Ham singer of Goth Rock pioneers Bauhaus, where his Badass Baritone, doom and gloom poetics and vampiric appearance earned him the title of "Godfather of Goth".

After the band split and he tried a short collaboration with Japan's Mick Karn as Dalis Car, he set out on his own moderately successful solo career, holding the Billboard Modern Rock charts longer than any previous single in 1990 with "Cuts You Up". His music is characterized by his high-personality Badass Baritone, a David Bowie inspired penchant for arty Alternative Pop, and the occasional dabble in World Music, including that of his home country Turkey since converting to Islam and moving there in The '90s.