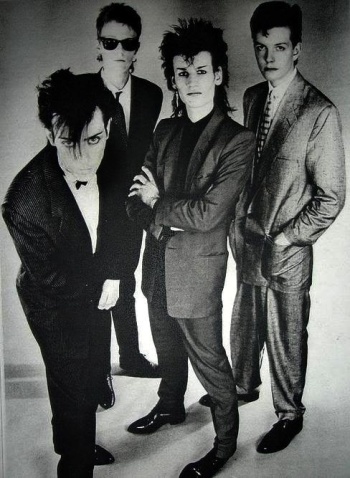 Possibly Trope Makers and certainly Trope Codifier of Goth Rock. Bauhaus aren't just a goth band, they were the goth band. Although the band mainly performed Goth Rock and Post-Punk, they were not limited by it, and often explored their love of Dub music. The band consisted of: Vocalist Peter Murphy, guitarist Daniel Ash, bassist David J, and drummer Kevin Haskins.

When the band broke up, Murphy formed the short lived Dalis Car with Japan bassist Mick Karn, followed by a solo career. Haskins, Ash, and roadie Glenn Campling formed Tones On Tail. Shortly after Tones on Tail dissolved, Ash and Haskins re-grouped with David J to form Love and Rockets (named after the Hernandez brothers' comic). After Love and Rockets' breakup in 2009, Daniel and Kevin formed a new group in 2017, Poptone, with Kevin's daughter Diva Dompe on bass. Peter and David toured together in celebration of Bauhaus' 40th anniversary the following year.

In August 2019, Peter suffered and quickly recovered from a heart attack, which led to renewed contact with his former bandmates. Bauhaus is set to perform live again later this year.

Not to be confused with the German artistic movement, although their name is a Shout-Out to it.