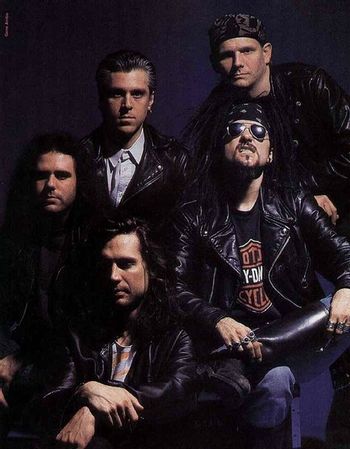 Ministry, back in 1992
So the only one thing that I could do was ding a ding dang my dang a long ling long...
—Ministry, "Jesus Built My Hotrod"
Advertisement:

Ministry was the Trope Maker for the genre of Industrial Metal back in The '80s and helped popularise it along fellow Trope Codifiers Nine Inch Nails. Both bands also have something else in common, having just one mastermind and constant member. In Ministry's case, this is a man named Al Jourgensen.

The band was formed in Chicago in 1981. Their initial material was largely New Wave Synth-Pop, as shown on their first album With Sympathy. Jourgensen considers the album as Old Shame and Canon Discontinuity, referring to Sympathy as "an abortion of an album" and blaming Executive Meddling for its existence. Fans largely follow the Word of God on this one, although it is notable that the follow up and somewhat looked down on album Twitch was a harsher-sounding industrial album with no traces of the "Synth-Pop" sound that was so prevalent on the previous album.

Ministry as we know it began when Jourgensen decided to add aggressive Heavy Metal riffing and recruited who would become his main collaborators for a while, Paul Barker and Bill Rieflin. The resulting album, The Land of Rape and Honey, proved to be a landmark recording, combining harsh, electronics-heavy production with loud metal guitars and lots of sampling from old movies. Its follow-up, The Mind Is a Terrible Thing to Taste, refined this formula by hardening the sound even further and introducing a political slant. This period also saw the band adopt its now-famous leather-clad cowboy/biker appearance.

Also in The '80s, Jourgensen and Barker formed a flurry of side projects. These included the more light-hearted, absurdist Revolting Cocks (which essentially has the same lineup as Ministry, plus Luc Van Acker and Richard 23 at first), Lard (a collaboration with Dead Kennedys frontman Jello Biafra; tropes for their works can be found on Jello's page), Acid Horse (with Cabaret Voltaire), 1000 Homo DJs (where Trent Reznor contributed vocals to a cover of Black Sabbath's "Supernaut"), PTP (with Chris Connelly), and Pailhead (with Minor Threat guitarist Ian MacKaye).

Ministry finally had its main breakthrough with Psalm 69: The Way to Succeed and the Way to Suck Eggs. Besides providing the best example of their balls-out Hot-Blooded Industrial Metal sound and the triple guitar attack of Jourgensen, Mike Scaccia and Louis Svitek, it showed the band's sense of humour through the Crazy Is Cool hit single "Jesus Built My Hotrod" (with nonsense vocals by Gibby Haynes of the Butthole Surfers) and provided arguably one of the first Stupid Statement Dance Mixes with "N.W.O." Psalm 69 gained them a mainstream audience and would prove to be their most critically acclaimed and commercially successful album.

After Psalm 69, the band almost got derailed by the members' severe drug addictions, culminating in a 1995 raid of their Texas headquarters and Jourgensen's arrest for possession. He received a five-year probation sentence and subsequently struggled to overcome his addiction. Around the same time, Rieflin and Scaccia left the band. Their next two albums, Filth Pig and Dark Side of the Spoon, stripped away the industrial elements from their sound (synthesizers, samplers, electronics) in favour of straightforward guitar-bass-drums noise. The reception from both fans and critics was poor (although both albums have since gained supporters), and the band's lineup continued to be unstable. A guitarist from this era, Zlatko Hukic, had a solo career as a Rap Metal artist and a stint in the group Dark Lotus, under the name Marz.

Jourgensen finally kicked his habit after almost losing an arm to a venomous spider bite in 2001, and with Barker and new drummer/saxophonist Max Brody began working on 2003's Animositisomina. After touring for the album, Paul Barker left and with guitarist Mike Scaccia back, Jourgensen began work on a follow up and formed a new lineup. Reclaiming his old Industrial Metal sound (but adding Thrash Metal influences) and setting his sights on George W. Bush's presidency, Ministry released a trilogy of albums about how much Bush's presidency sucked: Houses of the Molé, Rio Grande Blood and The Last Sucker.

Jourgensen finally retired Ministry in 2008 after recording the covers album Cover Up. He spent the next few years focusing on running his record label 13th Planet Records and concentrating on his side projects Revolting Cocks and Lard. However, as of late 2011 the band is active again, with old standbys Scaccia, Bechdel and Quirin, plus new guys Aaron Rossi and Casey Orr, and a new album, Relapse, was released in 2012. However, Scaccia died on December 23, 2012 onstage while performing with Rigor Mortis. Gathering recordings Scaccia made between Relapse and his death, Ministry's thirteenth album, From Beer to Eternity, was released in late 2013, and the band toured in support of the album. They also announced the release of their fourteenth album, AmeriKKKant, for fall 2017 only to later push back the release date to March 9, 2018. Ministry spent the latter part of 2019 supporting Slayer on the North American leg of their The Final Campaign Tour. A tour to celebrate the 30th anniversary of The Mind Is A Terrible Thing To Taste was planned for 2020, but this was postponed several times due to factors related to the COVID-19 pandemic and occurred in 2022. They released their 15th album, Moral Hygiene, in 2021, to generally positive reviews.

"(Every Day Is) Halloween"

The meaning of this song is fairly obvious, it tells the story of a guy who dresses like a freak and gets stared at and made fun of.

In the 80s, this was something of a banner song for the emerging goth scene.

"(Every Day Is) Halloween"

The meaning of this song is fairly obvious, it tells the story of a guy who dresses like a freak and gets stared at and made fun of.

In the 80s, this was something of a banner song for the emerging goth scene.