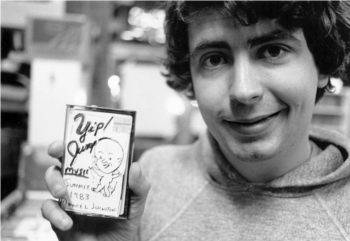 Hi, how are you?
Advertisement:

Daniel Dale Johnston (January 22, 1961 - September 11, 2019) was an American musician and artist. He has a strong cult following and is likely the most well-known "outsider musician", alongside being an artist/cartoonist who designed his own album covers.

Johnston was usually known for his lo-fi recordings from the 1980s, his most popular album being Hi, How Are You, released in 1983. He received a considerable Colbert Bump when Kurt Cobain wore a T-shirt with the album's cover on it and further named Johnston's Yip/Jump Music as one of his favorite albums. Other famous fans of his include Matt Groening, Johnny Depp, Tom Waits, David Bowie, Beck, Eddie Vedder, Jeff Tweedy, Built To Spill, Yo La Tengo, and Sonic Youth. In fact, many of those even recorded a tribute album for him. Johnston is also notable enough to have a documentary devoted to him: The Devil and Daniel Johnston (2005).

Johnston was diagnosed with both bipolar disorder and schizophrenia, and as a result was in and out of mental institutions and suffered many mental breakdowns during his life, one of them in 1990 leading him to crash his father's plane (fortunately, both survived the crash only mildly injured). As a result, his psychological issues informed the themes of a lot of his work, with frequent topics including loneliness and unrequited love. Aforementioned Hi, How Are You also remained unfinished due to a mental breakdown.

Johnston was also an identifiable loser geek who shared a love for comic books, music and old horror movies, pioneered home-recorded music and spent most of his life in his parents' house, cartooning and recording music. As much of a prototypical starving artist as he was, he did manage to make a career and gain some notability and respect in the Alternative Rock scene. Compared to other outsider musicians, he was also actually quite a capable musician on piano, guitar and mouth harmonica.

that Daniel passed away from a heart attack at the age of 58, leaving behind a legacy as one of the most important figures in the early years of alternative rock.

Releases with their own page:

Let me tell you about an artist...