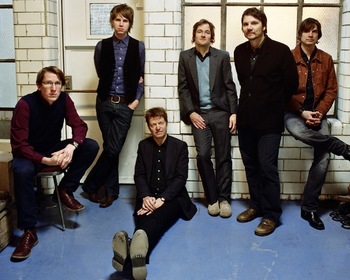 Wilco, Wilco / Wilco will love you, baby note  Wilco's current (and longest-running) lineup. Left to right: Mikael Jorgensen, Pat Sansone, Nels Cline, John Stirratt, Jeff Tweedy, and Glenn Kotche.
Influenced by:
"I am an American aquarium drinker
I assassin down the avenue
I'm hiding out in the big city blinking
What was I thinking when I let go of you?"
— "I Am Trying to Break Your Heart"
Advertisement:

Wilco is an American Alternative Rock band from Chicago, formed from the ashes of Uncle Tupelo. (After that pioneering Alternative Country outfit broke up in 1994, its two principal singer-songwriters moved on to form their own bands: Jay Farrar started Son Volt, while Jeff Tweedy and the other remaining members started Wilco.)

While their debut album, A.M., showed a heavy alt-country influence in its own right, Wilco soon evolved their sound in a more eclectic direction on subsequent releases, becoming one of the most critically acclaimed bands of the '90s and '00s in the process even as their lineup changed dramatically over time, with multiple members (including Ken Coomer, Max Johnston, Leroy Bach, Bob Egan, and most prominently the late Jay Bennett) shuffling in and out between 1995 and 2004. Besides with their original work, Wilco has also recorded the Mermaid Avenue series of albums in collaboration with English singer-songwriter Billy Bragg, in which they took unpublished Woody Guthrie lyrics and set them to music.

A Trope Is Born: