Music / The Life of Pablo 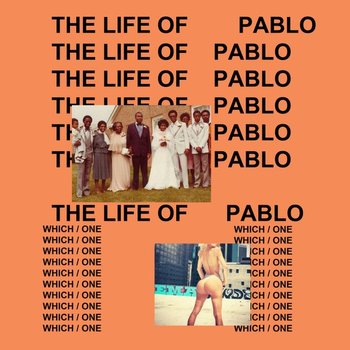 I can't let these people play me / name one genius that ain't crazy.

The Life of Pablo (formerly known as So Help Me God, SWISH, and Waves) is the seventh album by American rapper Kanye West, released on February 14, 2016 after a number of setbacks and delays.

West began work on the album in late 2013 when it was still known as So Help Me God, and it was intended for a release in 2014 with Rick Rubin and Q-Tip helping with production. In 2015, he renamed it to SWISH, and at the start of 2016 he revived the GOOD Fridays initiative that he started with My Beautiful Dark Twisted Fantasy to promote the album, in which a new single is released every Friday. West premiered the album on February 11 (its announced release date) at Madison Square Garden as part of his Yeezy Season 3 clothing line presentation, but ended up delaying it slightly further to refine the track list one last time and to include the track "Waves" at the request of Chance the Rapper.

The Life of Pablo was initially released as an exclusive for the streaming service Tidal, which resulted in a huge Colbert Bump as it caused a large increase in subscribers to the service and 250 million streams in the first 10 days. Following the album's release on Tidal, West continued to make changes to the album, declaring it "a living breathing changing creative expression." A largely updated version of the album, which included alternate mixes and other changes, was made available on other streaming services and for digital purchase on his website on April 1, 2016. Following Tidal's disclosure of its streaming data and the album's release to competing streaming services, The Life of Pablo debuted at number one on the Billboard 200, becoming West's seventh consecutive number one album on the chart and the first album to reach the summit primarily through streaming. However, it was illegally downloaded over 500,000 times within three days of being released.

The album was met with generally positive critical reception, although the kaleidoscopic and fluctuating sound presented was met with more mixed reviews.

The Tropes of Pablo: