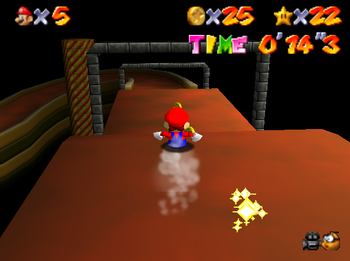 The Slide Level is a level where you must slide down to the bottom of a slope of some sort. It's very common to see them in 3D Platformers, especially Collect-A-Thon Platformers where one of the Plot Coupons is at the bottom of said slope.

There will usually be items such as in-game currency that you can collect on the way down. There will also be obstacles you must avoid that will cause you to take damage when you run into them and will slow you down. A time limit may be set in place where you must make it to the bottom in the time allotted or else you must restart the level. Racing another character is also common.

Moving around in these levels is not too dramatically different from how you would normally move around in the rest of the game, since you can still jump and move left and right.note In some 2D games, you can only jump, but in others you can move forward and backwards, too. The only key difference is that you are constantly moving forward and can't stop, only slow yourself down/speed up. Also, if you have any attacks that you use in regular gameplay, then they may not be usable here.

You can fall off the slope either by flying off the edge, possibly due to going too fast, or falling through holes in the ground. Doing so may cause you to fail instantly and send you back to the beginning of the level.

On occasion, you can win these stages by doing absolutely nothing - letting gravity do its work, or holding down on the button that lets you slide. In cases where this takes place in a game that has a two-dimensional view, jumping over the obstacles and Bottomless Pits is the only thing you really need to do since you can't move left and right, but you may still be able to change your speed while sliding down.

Can be part of a Slippy-Slidey Ice World if the slide is made out of ice. Compare Minecart Madness for another fast way to get down from a location. See also Video Game Sliding, where sliding is a part of a character's moveset to increase their mobility options.