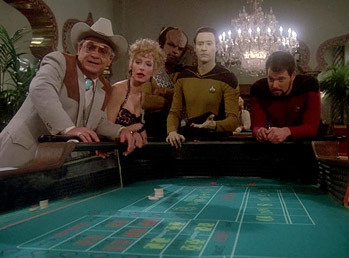 Casinos can be fun places, with their bright lights, variety of games, and chances to win cash. Alternatively, they can be seedy, corrupt places run by sleazy con men. Either way, it can be interesting to have an episode that takes place at a casino.

If a character intentionally comes to the casino, then why they do so tends to vary. It may be because they need money, and they'll do anything to get it. Maybe they just came there for some casual card games. Maybe they know the casino is corrupt, and aim to shut it down.

Super-Trope of Casino Park, the Casino Episode of Video Games. Related to Viva Las Vegas!, where the city is synonymous with casinos. If they're there to rob a casino or someone there, it may overlap with Heist Episode.