Recap / Star Trek: The Next Generation S2E12 "The Royale" 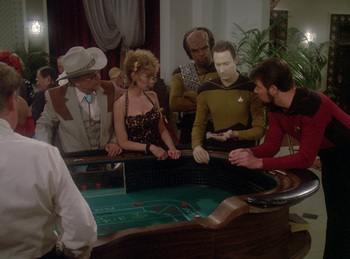 Hey, so remember when TOS got really weird in season 3 and they had that one Western episode? This one's even weirder.
Advertisement:

The Enterprise is investigating an unexplored planet way out in the back woods of the galaxy, where the Klingons have reported seeing the remains of a vessel floating around. Picard and Riker muse on the as-yet-unsolved Fermat's Last Theorem before the ship beams over a piece of the debris from the planet’s atmosphere to find that it is puzzlingly marked with the NASA emblem from the mid-21st century.

In another crazy twist, even though the planet is basically an ice cube covered by poison gas, Wesley locates a building on the surface surrounded by breathable air. Having nowhere else to look for clues, Riker, Worf, and Data beam down to it to see if they can figure out just what the hell is going on. They find nothing but a revolving door in the middle of nowhere. When they walk through it, they find themselves suddenly inside a glitzy, 20th century hotel casino. The people around them don’t show any life signs, and they act as though they’re in some cheesy crime novel. Worf quickly makes the reasonable guess that they’re simulations, but Data says that’s not it. Riker's amused by the whole thing until he realizes that they're stuck inside the fake casino.

Eventually they find the long-decayed remains of one of the astronauts from the ship they found in one of the hotel rooms, and in his bedside table they find a novel titled Hotel Royale as well as a journal with only one entry. The journal explains that the astronauts' ship encountered an alien life form that accidentally contaminated the ship and killed his shipmates. Then, in an attempt to make amends, they built a place for him to live based on the book he’d had with him. He laments that the book was awful enough that his being trapped in it makes him pray for death.

Armed with these revelations, Riker figures out that people can leave the hotel when the book says they’re supposed to, and comes up with the idea of playing along with the story. He, Worf, and Data take the roles of the foreign investors who buy the hotel at the end of the novel and then leave. Data adjusts the craps dice to his favor and breaks the bank. Once the away team has "bought" the casino, they are allowed to leave, and they safely return to the ship. Riker admits that they're leaving the planet with more questions than they started. Picard tells him that, like Fermat’s Last Theorem, it’s a puzzle that might never be solved. (See, about that...