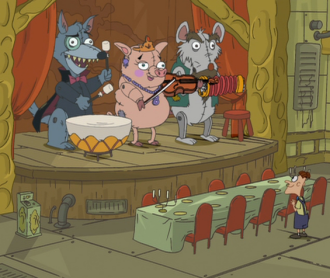 "Gunther Goat-Cheese's, the goatcheesiest place in all of Drusselstein!"
"Uhhh...Is this a pizza place, or like...a preschool?"
— Panda, We Bare Bears
Advertisement:

One for the Stock Parodies: an obvious pastiche of Chuck E. Cheese's, a combination pizza restaurant and "family fun" center. It's the home of arcade games, ball pits, subpar pizza, and costumed and animatronic characters from the depths of the Uncanny Valley. A fun place for kids? More like a Fate Worse than Death for parents.

The chain was created by Nolan Bushnell, the founder of Atari. It reached its heyday between the 80s and 90s, but also suffered bad publicity as a hunting ground for sexual predators and (in recent years) as a stomping ground for adult brawls.

It has inspired a number of knock-offs throughout the country which have gone into similar decline, with the most prominent being Showbiz Pizza Place and its band, The Rock-afire Explosion. The one exception is an adult version called Dave & Buster's

(other wiki), which is actually flourishing because, unlike the above which (unsuccessfully) play the Rule of Cute, it plays the Rule of Cool, caters to a wide audience (including the popular sports bar crowd) and has absolutely NO animatronics or mascots. Similar properties exist outside the US, including the UK's Wacky Warehouse

, though they rarely make their way into media.note Wacky Warehouse also has the important redeeming feature of almost always being attached to a proper restaurant and bar, and no animatronic mascots. As an interesting footnote, in Mexico and the Middle East, Chuck E. Cheese's used the name of Showbiz Pizza, which was the previous name of their matrix company in the States before converting all their locations into Chuck E. Cheese's instead. Unlike in the U.S., Showbiz Pizza in those regions never had the same problems their American Chuck E. Cheese's equivalents had, other than the franchise having died in Mexico in the 90s, albeit it still exists in the Middle East to this date. note Albeit it was announced a Mexican branch of Chuck E. Cheese's would open in the Mexican state of Aguascalientes in 2017.

However, to some there is still a nostalgia for Chuck E. Cheese's and Showbiz Pizza Place, so much that in spring 2018, an arcade bar for adults opened up in Kansas City, Missouri (home of the first Showbiz Pizza Place in 1980) featuring a working Rockafire Explosion animatronic band

, just as Showbiz did, however it closed as quickly as it opened, with a planned move to the far-more tourist-friendly Branson, Missouri in Development Hell.

Note that not all examples are terrible; some are rather awesome and kids will do anything to go there. (May still qualify as hell-on-earth for their hapless parents and the equally hapless teenage employees, though.) On the other hand, some of them go beyond "unpleasant" and become downright life-threatening.