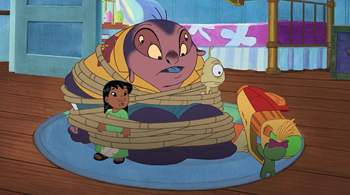 We now return to... Revenge of the Rag Dolls!
"Phantasmo" is the second episodenote tenth episode in production order of Lilo & Stitch: The Series. It first aired on September 27, 2003.

The Pelekai ʻohana are spending dinner time at Macki Macaw's enjoying pizza, games, and "primitive Earth entertainment technology" when Lilo decides to play a claw game for a "genuine" pearl oyster. Stitch offers the only quarter that he brought and manages to grab the shell, although the machine breaks before it awards the prize. He shakes the machine to release the prize and Nani scolds him, but the Macki Macaw's employee working there allows Lilo and Stitch to keep the prize, provided that they leave.

Back at home, Lilo tries to give Stitch a bath, but he runs off when Nani says the "B-word". After Lilo grabs him again and puts him in the tub, the splash of water from him going in washes away the oyster shell, which opens to reveal to the audience the pod of Experiment 375. The experiment activates away from everyone's sight and causes a huge mess in the kitchen. Stitch, who just came out of the tub, notices the mess and tries to save Pleakley's dishes from breaking, but the rug he was standing on was literally pulled from underneath him by 375, causing Stitch to drop them. Nani gets angered at the sight of the mess and sends Stitch to his room, even though he tries to proclaim his innocence. Lilo tries to defend him, but Nani says that it's bedtime, so they'll talk about it tomorrow.

Overnight, 375 sneaks into Lilo and Stitch's bedroom and takes control of her doll Scrump. Stitch notices and follows the doll into the living room, but aside from Lilo's record player going off, he does not find anything. However, as he tries to return to his bedroom, he gets knocked out by the elevator platform going down on him.

The next morning, Nani screams as she notices her face painted green, while Jumba and Pleakley run out of their room after a small explosion. Jumba says that his experiment analyzer is sabotaged and Pleakley shows that his begonia's gone missing. After Lilo comes down wondering where Stitch is, everyone find him waking up in the living room with a paintbrush and Pleakley's plant in his hands, with Lilo's record player and "Hound Dog" single broken. They also find a photograph of Stitch supposedly scrubbing his foot with Nani's purple toothbrush, which causes her to kick him out of the house in disgust and anger, ordering him to stay outside until she returns home. Lilo then has Stitch chained to a tree, telling him not to break free from it so they can prove to Nani that he can behave.

Lilo decides to have an Elvis movie marathon (consisting of Blue Hawaii three times in a row) with Scrump while she and Stitch wait for Nani to come home. As Lilo gets popcorn from the kitchen, Stitch look in from the windows to see Scrump ruining Lilo's videotapes. He comes in and attacks the doll, and Lilo sees him in the process. He tries to tell her that the "scary dolly" was the one ruining the tapes, but Lilo doubts that. After Stitch attacks Scrump again, Jumba nets him. Lilo still believes Stitch is innocent though and demands a fair trial.

With Jumba acting as judge, Pleakley acting as prosecutor, and Lilo's toys as the "jury", Lilo claims that Stitch is not guilty of the "crimes" that happened earlier, with him saying (in Tantalog) that he was asleep the whole time. When Pleakley uses Stitch's past violence towards Lilo's toys as incriminating evidence, Scrump gives a sly look towards Stitch, prompting him to attack the doll again just as Nani returns home. Jumba believes that Stitch could be reverting to his original destructive programming, so he places him in a machine outside to scan him for evil qualities. Once Stitch is left alone, he looks at the photograph of the toothbrush scrubbing his foot, and notices Scrump taking the picture in a mirror reflection.

While Jumba and Pleakley watch an Elvis film, Lilo seems to have suddenly lost Scrump. She finds the rag doll ruining Pleakley's plant in his and Jumba's room. Experiment 375 leaves Scrump, revealing himself to her, and takes possession of a long length of rope, restraining her and then Jumba and Pleakley. 375 then reveals himself to Jumba and Pleakley, causing Jumba to recognize him, and takes control of Scrump again to fire a gun at the three. Before 375 could do so however, Stitch enters through the window and pins Scrump down, forcing 375 to escape. Stitch frees his family, with Lilo relieved that he's now proven innocent.

As Lilo, Stitch and Jumba look for 375, Pleakley tries to hide back in his room, but "Phantasmo" (as Lilo called 375 earlier) cuts him off by possessing a vacuum cleaner and sucks his head into it. Stitch and Lilo find that they cannot trap Phantasmo in a net or a containment capsule, since he is intangible. They try to chase down the experiment, but they still cannot catch him, especially when he takes control of the X-Buggy. Nani picks up Lilo and Stitch in her jeep, having been told by Jumba and Pleakley about the experiment. Lilo realizes that Phantasmo desires attention, so she has Nani stop at Macki Macaw's.

Lilo and Stitch lead Phantasmo inside the restaurant, where he traps Stitch in the claw machine for a moment and chases Lilo backstage where the broken Macki Macaw animatronic lies on the floor. Phantasmo possesses the animatronic and tries to attack the two, but then Lilo opens the curtains and convinces him to perform to the audience. As Phantasmo puts on a rockin' show as the restaurant's title bird, Nani apologizes to Stitch for falsely believing him to be guilty. Lilo and Stitch do forgive her, provided she buys games and pizza. Nani gives Stitch money, and Lilo looks at Phantasmo rocking out, with the experiment happy to have an adoring audience.

The experiment of the episode: