Pulling the Rug Out 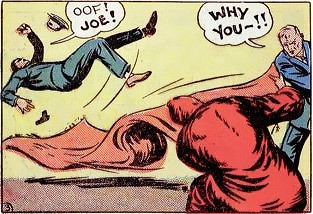 A classic piece of Slapstick, this trick consists of grabbing hold of the rug (or other floor covering) that someone is standing on and yanking it towards you. The target will find their feet being dragged along with the rug and out from under them, causing them to topple to the floor.

This is the origin of the idiom "[to] pull the rug from under them", meaning to put someone at a disadvantage by suddenly withdrawing support from them.

Compare Tablecloth Yank, a related trope where a tablecloth is pulled out from under a vase of flowers on a table, leaving the flowers still standing.