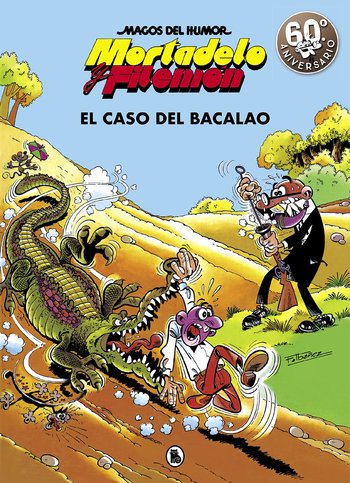 TIA agents Mortadelo and Filemón are called again for a dangerous mission. Tons of cod are being sold to a ridiculously low price in the city, causing an overflow of proportionally thirsty citizens due to the fish's dry, salty nature. Behind this seemingly harmless stunt turns out to be no other than the local Italian mafia, led by godfather Lucrecio Borgio, whom the Supervisor suspects might have more sinister intentions. Soon, Mortadelo and Filemón discover Borgio plans to monopolize the city's water supply, effectively strangling its economy due to the demand created by the cod, and are ordered to stop him.

The story was initially published by parts in the Gran Pulgarcito magazine, continued in the Mortadelo magazine after the former folded down. It is therefore divided into five chapters which were kept when it was re-published as a full album.

Its general plot, or a modernized, James Bond-esque version of it, served as the basis for the second live action movie, Mortadelo y Filemón - Misión: salvar la Tierra, released in 2008. The secret entry to the TIA headquarters was also featured in the first movie in 2003.

The 2007 chapter Venganza cincuentona featured the return of Lucrecio Borgio and his gang, although in a very minor way.