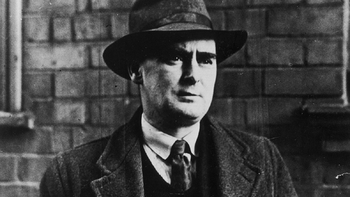 Brian Ó Nualláin/Brian O'Nolan (5 October 1911 – 1 April 1966) was an Irish civil servant, novelist, columnist and satirist, and one of the giants of twentieth-century Irish modernism. He was best known under his many pseudonyms, notably Myles na gCopaleen for his satirical newspaper column An Cruiskeen Lawn and his Irish-language novel, An Béal Bocht ("The Poor Mouth"), and most famously Flann O'Brien for his English-language novels.

He was known for his bizarre metafictional sense of humour, and his positively vicious attitude to contemporary Ireland in An Cruiskeen Lawn. Nothing was safe, neither politics nor religion nor society. He even mocked his own day job, as a powerful private secretary in the Department of Health, where the fact that he was Myles na gCopaleen was an open secret.