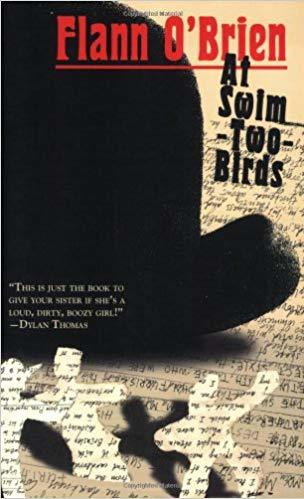 "One beginning and one ending for a book was a thing I did not agree with"
Advertisement:

Flann O'Brien's first novel, At Swim-Two-Birds is a comic, metafictional work containing an intertwining celtic knot of stories wherein characters try to overthrow their author's rule by drugging him, among other things. The stories largely consist of characters taken (or to use O'Brien's words, "stolen") from a vast number of preexisting works. The cast ranges from aspiring authors to ordinary Dubliners to Mad Sweeny.

Undoubtedly one of the most convoluted books ever written.

Synopsis of the plot: The book begins by introducing its unnamed narrator, a student living with his uncle. The book continually switches between first-person "biographical reminiscences" of the student's life, and a number of stories he had been writing in his spare time. After explicitly stating that "A good book may have three openings entirely dissimilar and inter-related only in the prescience of the author...," we are presented with exactly this. One of these stories involves the Pooka MacPhellimey, a species of human Irish devil with magical powers. Another follows John Furriskey, a character born already an adult and with a full memory without any experience to account for it. The third talks of the legendary Irish hero Finn MacCool. Furriskey, we later learn, was created via aestho-autogamy by Dermot Trellis. Trellis is an author who created Furriskey to be a character in his work, an anvilicious novel demonstrating the power of sin to corrupt even the most pure. Trellis has Furriskey and his other characters stay with him at the Red Swan Hotel where he can keep an eye on them and ensure that they do exactly what he says. Unfortunately, Trellis cannot control his characters while he is asleep, leading several of his other characters to drug him. Finn MacCool, meanwhile, had been recounting the tale of Mad Sweeny, another character from Celtic mythology. Later, the Pooka is met by the Good Fairy. After discoursing on the nature of good, evil, even and odd numbers, and kangaroos, they begin a journey to the Red Swan Hotel. Along the way, they are met by a large number of other "stolen" characters, among them, Sweeny. It's eventually revealed that the event which brought the Pooka and Good Fairy to the hotel was the birth of Trellis's son by one of his female characters. When Orlick, as he is to be named, is born, his mother dies in childbirth. Due to the loss of his mother and the influence of the Pooka (who won influence over Orlick from the Good Fairy during a card game), Orlick - only half-fictional, on his mother's side, which gives him powers that Trellis' other characters lack - is inspired to write a book about his own father, whereby he may punish him after trapping him in the artificial framework of a story. Conclusion of the foregoing.

The book was more or less created as a means for O'Brien to play with metafiction tropes. Extremely impressive, given that the work was published in 1939. Unfortunately, although it received much critical acclaim (even from none other than James Joyce aka Captain Mind Screw), the book only sold 244 copies before the warehouse in which it was stored was destroyed in World War II, and was only reprinted again in 1950.

The Third Policeman, another Flann O'Brien novel, also has a page on this wiki.

Catalog of tropes contained within the book:

Conclusion of the foregoing.