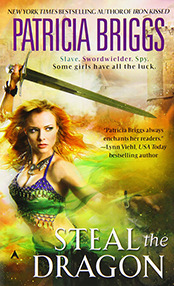 Steal the Dragon is a high fantasy novel by Patricia Briggs, the second book she ever wrote. Set in the same world as Masques, Wolsbane, and When Demons Walk.
Advertisement:

Rialla of the horses is an escaped slave turned mercenary in Sianim, content in her work. But when the Spymaster offers her a job that could potentially lead to the extinction of slavery in Darran, she cannot refuse.

Tris is a Sylvan who was left to die by his people for having compassion, now a healer for a small town in Darran. But when he is offered a chance to end his solitude, he leaps at the chance.