Rage Against the Author 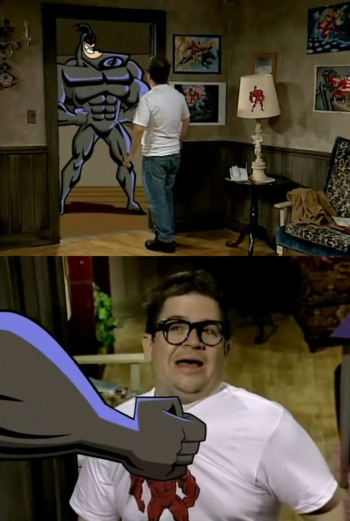 So, The Good Guys Always Win, huh? Lemme have a word with ya about that, Mr. Author...
[Daneel Rush, his whole body covered with bandages, types with the only part of his body that still works... his left index finger]
Henry: [whispers] What... happened to him?
Terriermon: [whispers] ...Rika read the last chapter.
Henry: [whispers] ...I see... he was asking for it.
— Digimon fanfic Tamers Forever Series
Advertisement:

The first step in this trope is tearing down the Fourth Wall without Audience Participation. The creator(s) of the work have become characters in their fiction, often because their fictional characters have left the fiction and entered "our" reality. Usually this creates a Show Within a Show effect that doesn't normally exist.

Early versions of this trope were Played for Laughs, but the paradox of killing the creator had to be examined. Some stories had the work end after the creator was killed, while others go a secondary meta-level, or even leave the question of how the character can continue to exist without their creator open for the audience to answer.

See also Interactive Narrator, Author Avatar, Author Powers, Real World Episode, and Who Writes This Crap?! Rage Against the Heavens is where the work considers the creator to be someone who lives in this world that they created.

To see one of our tropers suffering through this, check the self-demonstrating page.

The tainted hitchhiker Alan is forced to run from in his nightmare is a character in a story he has been writing, angry at the author for creating him in the first place.

The tainted hitchhiker Alan is forced to run from in his nightmare is a character in a story he has been writing, angry at the author for creating him in the first place.