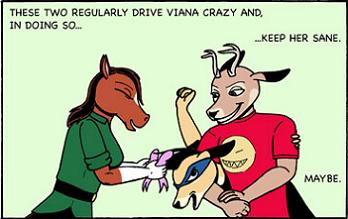 "But which is more entertaining: peaceful moments of happiness...or moments of conflict?"
Deer Me is a webcomic by Sheryl Schopfer, about three anthropomorphic animal roommates and their Slice of Life experiences. The main cast consists of Viana Doesulen, the hotblooded masked doe working at a Bath & Body Works clone; Thomas Millwood, freelance artist and sane-ish resident; and Velvet Hairyson, a horse who’s desired by just about every male she meets. And that's just the beginning.
Advertisement:

It was originally at Comic Genesis, but can now be read at http://comic.deerme.net/

Deer Me provides examples of: