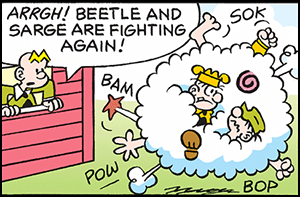 When fighting, two (or more) animated or comic strip characters may vanish into a ball of smoke, from which the sounds of a really violent struggle emanate.

Hands, feet or other random objects may protrude momentarily, then be pulled back in.

This is used to indicate that the fight is so violent that:

During a really long fight, the Big Ball of Violence may start rolling around the area, sucking up any nearby bystanders or objects into the fight (not unlike other big stickyballs) — one of which is usually That Poor Cat. Sometimes a shoe flies out for comedic effect.

Sometimes a character escapes from the Big Ball of Violence, leaving the other participant to realize he's been beating up himself (or, if several characters had ganged up on the escapee, each other), or if a "reluctant" participant tries to sneak away and escape immediately gets dragged back into it. In other cases, if a character witnesses a Second Person Attack, and is easily overpowered, then the Big Ball Of Violence may mean the overpowered character is taking an ass-kicking.

Another common gag is to have the fight come to a sudden halt, usually at the demands of an authority figure, with the participants stuck in ridiculous poses mid-attack, such as trying to bite somebody in the leg, or about to use a lethal weapon they certainly didn't have going into it.

Can be a subtrope of Nothing Is Funnier, if it is played for comedic effect. For instance, when the smoke clears, someone may be liable to be sporting Amusing Injuries.

Take Our Word for It that Battle Discretion Shot serves a similar function. Subtrope of Fight Unscene.

The Cuphead Show - No Fighting

Despite Elder Kettle's warnings of no fighting in the house, Cuphead (Tru Valentino) and Mugman (Frank Todaro) engage in a cloudy battle anyway causing ruckus around the house.

The Cuphead Show - No Fighting

Despite Elder Kettle's warnings of no fighting in the house, Cuphead (Tru Valentino) and Mugman (Frank Todaro) engage in a cloudy battle anyway causing ruckus around the house.