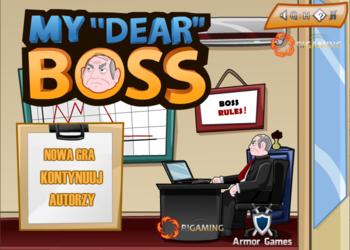 My "Dear" Boss is an Adobe Flash video game by Origaming published in 2012. The game has you play as an employee who keeps getting his ideas refused by his boss. Frustrated, he decides to kick the boss as revenge. To do just that, you have to click a button as the kick-o-meter is as close to the center possible. Along the way, he will get hit by birds, dogs, protesters, ex-employees, cars, and more. After each run, you can buy upgrades and new shoes to reach three goals, those being the boss's house, a hospital, and the cemetery.