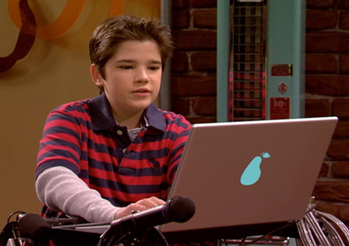 You know you've made it when your product keeps being parodied everywhere. That's what Apple must be thinking, anyways.

You could go with a piece of hardware that has no logo... but come on, it's easy to parody Apple. Their symbol, an apple with a small section bitten off, is really easy to draw... and even easier to spoof. As is their name.

Which is probably why nowadays, many fictional computers, tablets, smartphones, and other pieces of advanced technology bear a logo shaped like a fruit or another type of food. If it's not a fruit or a food of some kind, it'll still be a monochrome symbol of something recognizable or corresponding to the work's context. And the name could be [whatever letter]Phone. To make the reference even more obvious, the logo also has a small section bitten off.

A subtrope of Bland-Name Product, as it is clearly mocking the Apple logo or name. Also compare Everything Is an iPod in the Future. Of course, this is to avoid lawsuits, as are most bland name products. This trope becomes even funnier if that logo is on every type of electronic device the characters use.

Compare iProduct, where "i" is prefixed to things to make them cool and internet-y. For Real Life instances where Apple products are clearly imitated e.g. to cash in or illegally profit off their trademarks, see Shoddy Knockoff Product. If actual Apple products (especially the Mac), show up in a work more often than their real-life market share would suggest, that's Everyone Owns a Mac.