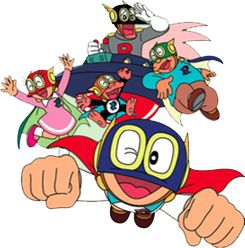 Mitsuo Suwa, an ordinary 11-year-old boy, is recruited by an alien named Birdman to become a superhero called a Perman, along with Booby the monkey, Sumire Hoshino the idol star, Hozen Oyama the Buddhist monk, and Koichi Yamada, the youngest of the team.