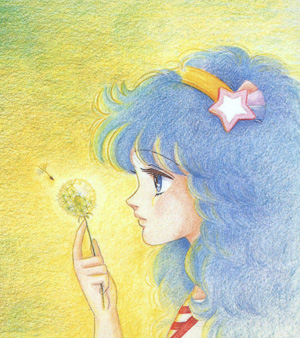 Persia, the Magic Fairy is the second Magical Girl anime created by Studio Pierrot, airing from 1984 to 1985.

11-year old Persia is an energetic young girl who has grown up alongside animals in the Serengeti. Twins Riki and Gaku Muroi bring Persia to Japan with them, where she lives with a couple who own a grocery store. During the return flight to Japan, Persia finds herself in the "Lovely Dream," the land where dreams are born and grow. The Fairy Queen appears before Persia in the form of a butterfly, and explains that the Lovely Dream is in danger, requesting Persia's help.

She gives Persia a magical golden headband which reacts to the word "Papurikko". With it, Persia can conjure a magic baton which bridges her world and Lovely Dream, as well as transform into an older self by saying "Perukko Raburin Kurukuru Rinkuru". She is sent with three kappa back into the regular world with the mission of collecting love energy to thaw the frozen Lovely Dream.