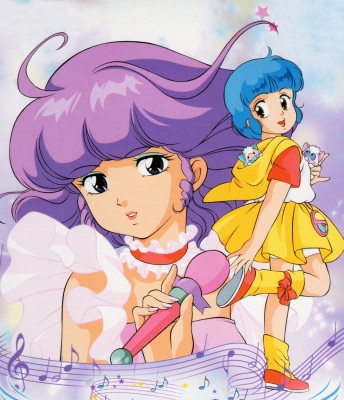 Magical Angel Creamy Mami (or Creamy Mami, the Magic Angel) was the first Magical Girl series done by Studio Pierrot, and aired for 52 episodes from 1983 to 1984. It's the Trope Maker for the Magic Idol Singer genre, and it became quite popular in Europe (broadcast between 1985 and 1988).

Yu Morisawa is a ten-year-old girl living with her parents in their creperie. She has a crush on her best friend, Toshio, an older boy who (unfortunately for Yu) thinks of her as a sister.

One day, Yu sees a giant boat floating in midair, which turns out to be a Flying Saucer. She gets inside the ship and meets an alien named Pino Pino, whom she helps to find his way home. In gratitude, Pino Pino decides to give her magical powers contained in a powder compact, for one year's time. He also gives her two magical kittens, Posi and Nega.

Using a Magical Incantation ("Pampuru pimpuru pam pom pum"), Yu can turn into a beautiful, purple-haired, 16-year-old version of herself. The next day, she hangs around in her new teen body form and meets Shingo Tachibana, a company manager for Parthenon Productions. He persuades Yu to sign a contract in order to be an Idol Singer. She does so under the pseudonym of "Creamy," the name of her parents' restaurant.

During a whole year, Yu/Creamy becomes a star singer, makes Toshio fall for her, makes Megumi, the former Parthenon Productions' idol, clingy and jealous, escapes plots to discover her true identity, and has a number of strange, magical, and supernatural adventures, all while continuing to attend school as Yu.

After the TV series ended, an OVA was released in 1985, where Yu is 16 (for real) and learns that Shingo Tachibana needs Creamy again. All that Yu has to do to look like Creamy now is to wear a purple wig, so she can act in a movie with Megumi.

A manga retelling from Megumi's point of view, Magical Angel Creamy Mami and The Spoiled Princess, was published starting from December 2018 in the online magazine Comic Tatan. Seven Seas Entertainment licenced Spoiled Princess in 2020, with its first volume releasing in 2021.