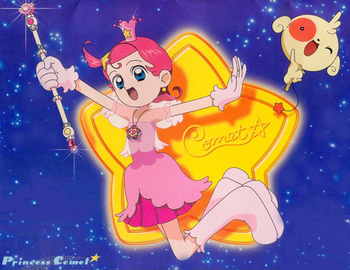 Princess Comet (Kometto-san) is a Magical Girl Manga and Anime that ran in Japan in the 1960s.

The Shōjo Manga was drawn and written by Mitsuteru Yokoyama, and published by Shueisha in Margaret magazine with a run from June 1967 to November 1967.

The initial Live Action adaptation had a run between July 3, 1967 and December 30, 1968, totaling 79 episodes. The second season had a run between June 12, 1978 and September 24, 1979, totaling 68 episodes. An anime series ran from April 2001 to January 2002. While the different series had the same general premise of a girl coming from space and living with an Earth family, and using a baton wand to do magic, each has its own plot and setting. The anime series is notable for changing the main character from an adult to a child and drastically changing her character design as a result.

The anime Princess Comet aka ''Cosmic Baton Girl Comet-san" is a Magical Girl anime about Comet, the 12-year-old princess of Harmonica Star, who is sent to Earth in order to find the prince of Tambourine Star. However, Comet has no interest in the prince, and instead quickly becomes fond of life on Earth and the people who live there. Her life is made more complicated by Princess Meteo, a rival princess who is also (theoretically) searching for the prince and wants to claim him for her own.