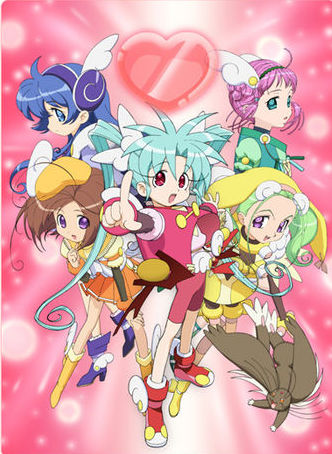 Re-imagining of the 1996 Affectionate Parody Pretty Sammy series as a 2006 Magical Girl anime of the Cute Witch variety. Sasami Iwakura is a young girl with magical powers of a telekinetic type that her parents forbid her from using. This has led to her feeling isolated due to a belief of herself as some sort of freak. One day, she goes to the newly formed cooking club headed by Washu, a rather eccentric teacher that starts the club off by faking an attempt to kill her pet. After some hilarity, it turns out that the cooking club is a front for the magical girls club, with Sasami and Misao as the first members. Through this club, they meet more awakening magical girls and discover a masquerade involving a magical world.

This show manages the impressive feat of applying a Lighter and Softer tone to a pseudo-series that was already pretty light and soft to begin with. In this case, it cut the over-the-top style of parody in favor of more Fantastic Comedy Dom Com style. For example, Washu still has some shades of her pseudo-Ax-Crazy characterization, but it gets considerably toned down after her introduction. Because of this, the series most likely won't appeal to people that were expecting a continuation of the parody style, but for those that want a magical girl show of the more traditional kind, this is as good as any.

It's always a dilemma when there are more people than working stalls!

It's always a dilemma when there are more people than working stalls!