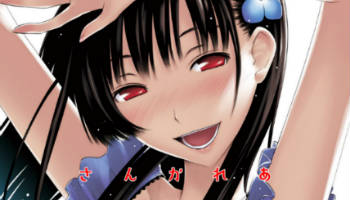 Flesh-eating abominations never looked so good.
Chihiro: Me? I'm not into living chicks! Ah, how I'd like to meet a cute zombie-girl... I want to go out with a girl whose arm is almost ripped out and guts are flowing out! But I guess there's no way that will happen, right?
Rea: Then... if I ever become a zombie... will you take responsibility?
Advertisement:

Sankarea is a manga by Mitsuru Hattori, the author of Kenko Zenrakei Suieibu Umisho. It ran in Bessatsu Shonen Magazine from 2009 to 2014.

Chihiro Furuya is a high school student with a fascination for zombies; movies, books, games, plushies... To revive his cat, Babu, who died a few days ago in an accident, he's been trying to make a "resurrection" (read: zombification) potion in an abandoned building in the past few days. Incidentally, there's another person who's been visiting the area: Rea, a girl from a wealthy family and an idol to everybody in the neighborhood, who lives under the shadow of an oppressive father. After finding out what Chihiro's been trying to make, she helps him with the potion while slipping out a mention that she'd also like to die and be reborn.

After Rea's father finds out what she's been doing, he attempts to confine her to their mansion for the rest of her life, and sends his personal guard to deal with Chihiro. In the middle of the scuffle, she falls off a cliff and dies impaled by a tree... after drinking the zombification potion the night before, in an attempt to poison herself out of despair.