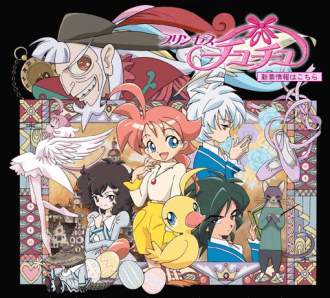 Once Upon a Time, there was a man who died. The man's work was the writing and telling of stories. But he could not defy death. The last story the man was working on was about a brave and handsome prince who vanquishes a crafty raven. But now it seemed their battle would go on for eternity. "I'm sick and tired of this!" cried the raven. "I'm sick and tired of this!" cried the prince as well. The raven escaped from the pages of the story and the prince pursued the foul creature. In the end, the prince took out his own heart and sealed the raven away by using a forbidden power. Just then, a murmur came from somewhere: "This is great!" said the old man who was supposed to have died.

And so the heartless prince is found and enrolled in a ballet school, whilst the story remains static for years. One cold, foggy day the old man (Drosselmeyer) sees a wistful duck watching the Prince. And so he brings her into the story in the hopes that she'll move it forward, bestowing her a mystical pendant that transforms her into Princess Tutu: a princess with the power to restore the Prince's heart to him, while soothing the hearts of those corrupted by the shards.

But great changes are foreshadowed as these actions catch the attention of Fakir, a cold-eyed boy who dictates everything Mytho does, and Rue, the prince's enigmatic girlfriend. Unhappy with the Prince's restoration, both take active roles in the story, hoping to halt its progress, while the story twists down a dark, complex path, revealing Drosselmeyer's story to have a life of its own. As Ahiru (the duck, whose name literally means 'duck' in Japanese. Her name is explicitly 'Duck' in the English dub and official DVD subtitles, to properly preserve the Theme Naming for the audience) struggles with the decisions she makes and the impact they will have on others, her priorities shift and she fights Tutu's fate.

Princess Tutu is an original anime created by Ikuko Itoh, who's best known for her animation direction and character design work on Sailor Moon; she was also the chief animation director and character designer for this anime. Junichi Sato, who also worked on Sailor Moon as director for the first two seasons, was the main director for Tutu as well. The anime (a Hal Film Maker production) takes inspiration from a number of classic ballets; most of the music is taken from these, and the two princesses' costumes are inspired by Odile and Odette of Swan Lake.

The anime first aired from 2002 to 2003 for 26 episodes. A markedly different two-volume manga was made concurrently with the anime.

If you live where it is available, the anime can be watched dubbed on Hulu

Spoilers will be marked when possible, but some aren't, so be careful. You Have Been Warned!