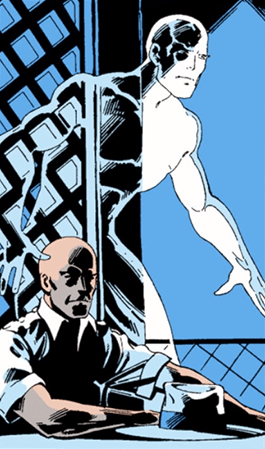 Asuna: Where am I?
Negi: A small ravine village where I lived six years ago.
Asuna: Hmm. Hey! Why the hell am I naked!?
Negi: Ah... S-sorry, but that's how it works... a technical thing.
Asuna: Cut the jokes! It's snowing in this village!
Negi: I'm pretty sure you won't be cold.
Asuna: That's not the problem right now!
— Negima! Magister Negi Magi (during a Pensieve Flashback)
Advertisement:

If a character is shown in a Metaphysical Place — Another Dimension, another plane of existence, inside one's mind, etc. — there's a good chance that he or she will be completely nude, to emphasise that this location is outside the bounds of the physical world.

Frequently seen in sequences involving Journey to the Center of the Mind or soul-viewing as symbolic of the "naked" truth and/or vulnerability, or just the fact that you can't take anything with you, clothing included. Also commonly implemented with a Fetal Position Rebirth. Of course, sometimes it's not done for the symbolism, as much as for the fanservice. Also regular in anime, partly due to the fact that in Japan, nudity with children is not viewed as sexual; instead it focuses on their innocence and purity.

Interestingly, elements like hair decorations have a good chance of staying on the character in this state, despite not being any more a part of their body than clothing.

Compare Naked on Arrival and Naked on Revival.

Scenery Censor and Barbie Doll Anatomy will often be implemented to prevent things from getting too explicit. Not to be confused with "Not Wearing Pants" Dream.