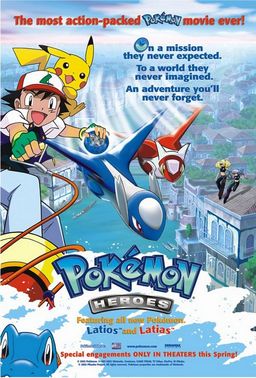 Legends make the heroes. In this case, the same guys from the last 4 films.
Advertisement:

Pokémon Heroes: Latios and Latias is the fifth in the series of Pokémon: The Series movies and the first not to have a number in the title. It tells the story of Ash and friends' visit to the Venice-like city of Altomare, where they take part in a water chariot race. They later meet an aspiring artist named Biancanote not that Bianca and her grandfather who runs the city's museum. The two of them hold a secret: the knowledge of Latios and Latias, twin dragon Pokémon who protect the city and the Soul Dew, a mystic orb that keeps the city safe from natural disasters. When a pair of thieves, Annie and Oakley, come to steal the Soul Dew and revive the ancient Pokémon at the museum, it's up to Ash and his friends, as well as new allies, to stop them.

On a side note, this was the final Pokémon film with the original cast, as well as being the last Pokémon movie to get a theatrical release in the U.S. for over 16 years. Starting with Pokémon the Movie: White - Victini and Zekrom in 2011, subsequent films got one-weekend limited engagements in select cities, but it wouldn't be until Pokémon Detective Pikachu when the franchise got another major nationwide theatrical release.